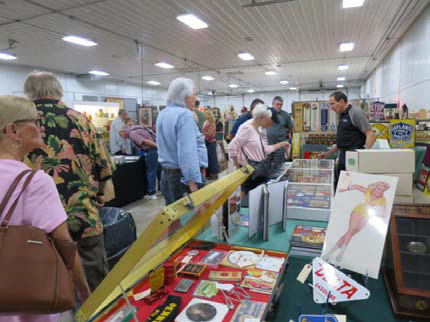 As previously reported, the Indy Ad Show was sold to new owners, Nona and Mark Wilson, doing business as Northstar Collective. They ushered in a new era of this long-running show in their inaugural event that took place September 23-24, 2017. By almost any measure, the show was a triumph in visionary out-of-the box thinking, attention to detail, sensitivity to the needs of dealers and buyers, and willingness to take risks.

The show was moved from the Indiana State Fairgrounds in Indianapolis to the newly renovated Boone County Fairgrounds in Lebanon, a short drive northwest of the city. They expanded the Indy Ad Show into an extravaganza of three shows, known collectively as the “Boone County Treasure Hunt”. In addition to the Ad Show, a Vintage Market and a Gas and Oil Show also took place.

They amassed the largest assemblage of antique advertising dealers in one place at one time in years–perhaps ever. There were over 300 booths of great merchandise. Over 1300 people attended, many coming from very long distances. Buyers expressed sheer delight at the range, quality, and vast quantity of material that was available. A number of individuals voiced similar sentiments: “If you can’t find something you like here, then you may as well give up.” Indy Ad Show

So what did the new owners do right? A whole lot. They recruited record numbers of dealers. They dramatically reduced the cost of a booth. They expanded the show into three events. They charged only $8.00 to attend all three shows. They advertised the heck out of the event in trade publications, TV, radio, and even roadside billboards! They were flexible and helpful in their interactions with dealers.

In an unscientific poll conducted by this writer, most dealers reported being very pleased with their sales. In fact, some were unabashedly giddy about how well they did. However, the large number of dealers did result in higher levels of competition and some felt the impact of that. The vast majority of dealers that I spoke with were very happy with the new location in Boone County. The bottom line was that all I spoke with plan to return to future shows.

The buyers I spoke with reported having a great time. They were thoroughly delighted with both the quantity and quality of the items for sale. They also liked the new setting which offered interesting display areas, including nooks and crannies that hearkened back to the “good ol’ days” of the Ad Show.

Kudos go to Nona and Mark for their gutsy and successful first showing! They report that they were especially pleased with the number of dealers and shoppers they reunited at the show.

Hordes of collectors and dealers will eagerly be looking forward to the return of this exciting show in the Spring to see what treasures and opportunities await them.

Reprinted with permission from the October, 2017 issue of the AAAA Checkerboard, published by the Antique Advertising Association of America.